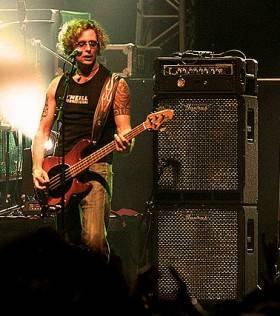 "The THD 450T, I play since November 2010, delivers a very powerful bass sound. What I like best in this amp, is two preamps transistor and tube. This feature has infinite number of steps per controller, and provides a rich tube distortion. THD creates a very transparent sound. The transistor stage provides a clear low end, through the mix with the tube preamp gives a compact, powerful Rockbassmix. All the settings are intuitive and easy.
The combination with one 4x10 inch and 1x15 inch box delivers the sheer power in rehearsal rooms, clubs and concert halls. By using a digital amplifier, the amp weights 4.2 kg, and equipped with neodymium speakers boxes make it to about 30 kg each."