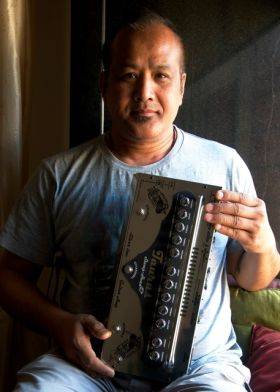 Kalyan Baruah, a multifaceted musician from the land of “blue hills and red rivers” is an epitome of success and inspiration for many budding musicians of his land. He has not only taken his Guitar to a new height but also created his niche in other arenas of music -production, programming, arranging etc.

Today, he is not only a first choice as Guitar Player, but also a Producer, Arranger, Programmer in the hub of Music Industry in India.

He has been the man behind many successful artists-singers like KK, Lucky Ali, Mohit Chouhan, Papon, Coke Studio @ MTV, MTV Unplugged, and numerous other Bands/Projects of Indian Music Scene. He has been playing live with many top Indian artists like KK, Salim-Suleiman, Adnan Sami etc. to name a few…..He is one of the most sought after Recording Artist of the Indian Music Industry and has recorded in hundreds of Bollywood hit songs, albums, Music Videos…

Kalyan’s enthusiasm for new sounds and technology, added with his professionalism has come to play a pivotal part in his career of more than 25 years. He continues to be an important and highly regarded Musician in the Recording Industry in India.